Hi everyone! I actually feel like I am talking to someone now after all the nice comments and entries in the guestbook - thank you all! I am still in the States - really can't post much as my time on the internet and my privacy are limited. But I'll get back up to speed when I return. It is nice to be back where there is an actual summer going on. Just wish it was under better circumstances. Looking forward to posting some more stories when I get back so check back later. Thanks again for all the kind words!
Posted by Karyn at 10:05 PM 1 comment:

Going out of town

Well, I've had better days. The bad news is that my favorite Uncle has passed away in the States. So on Tuesday, I am flying home for a while. Actually, a month. Leaving the cat and fish in the care of the hubby. So while I am gone, I will have irregular access to my blog. I am taking my laptop with me, but I will only have internet access when I am somewhere that has it. I'll be staying at my Mom's most of the time, and she is such a technophobe that if the power goes out, my brother has to go to her house to make the VCR stop blinking 12:00. Yes, VCR. Not even a dvd in sight. But when I go to my brother's or to friend's houses, I 'll be able to log on there and check in.

Also, I received a message asking if I had ever continued the story that I posted on here a couple years ago, A Bad Day At His Mother's. First, thank you for asking! Second, yes I have written the next part. I will post it when I get back the second week in September. So watch for it then! As it turns out, it is going to be about a 4 parter. Already started work on part 4 - somehow I missed part 3 and will have to come back to that - LOL! See you all soon.
Posted by Karyn at 4:49 PM 2 comments:

I have found a chat room option. On the left side of the page, down towards the bottom, there is a button for a chat room. Click on it and a new window will pop up. Type in a name to use. Then it will load a box for a password. You don't need one. Just click on Enter Without Password. The box will load - just give it a minute. Hope to see you there sometime! If anyone has a request for a specific chat time, let me know.
Posted by Karyn at 2:09 PM 4 comments:

It Was A 2Fer Night!

All in all, not a bad night! I did get my double dose this evening, as promised (well, I'm posting after midnight, so technically it was last night. Anyway, it was Thursday!). The first was over his knee with the leather paddle in the living room (sounds like a twisted version of Clue). Nice and stingy. The second, about an hour later, was over the end of the bed with the lexan paddle, the wooden paddle, and six with the crop - which he made me count! Owwww! But the funny thing is, it's now just a couple of hours later and most traces are gone. The heat is definitely gone. And there's just a little bit of soreness there, but not enough to make it uncomfortable to sit or anything like that. And even that will have disappeared by morning. I've always loved the idea of 'by the time I'm through with you, young lady, you won't be able to sit down for a week'. But I've also come to realize that with my iron butt, you would have to half kill me to accomplish that, so I guess I'll take a pass! Great for fantasy, but not for reality. I do wish the heat and sting would last just a bit longer though. And we did break one of the 'rules' of the week-long crash course - yes, he had his way with me after the second round. Well, can't really blame him. Besides, I might be a little insulted if the sight of his wife on the bed on all fours with a naked red bottom didn't entice him to make like a Great Dane! LOL!
Posted by Karyn at 7:11 PM 5 comments: 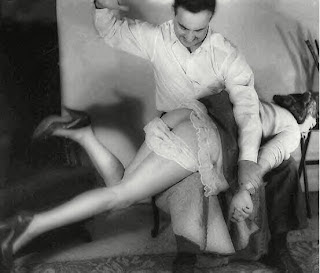 I just love these old vintage spanking photos. Him in his shirt sleeves, her with her panties pulled down just low enough for her bottom cheeks to peep out. The target area prettily framed by her panties and lifted skirt. That's what I like to see. Some of the pictures now are just too overtly sexual - everybody naked, ready to jump each other when the spanking stops! I guess I like the spankings that are more 'real' - more discipline than foreplay. That's what makes these old photos believable to me. I can imagine that he has come home from work and found out that she put a dent in the car that day. Over she goes, pants down, commence spanking! And you can imagine her getting up when he is done and going to the kitchen to start dinner while he sits down with the newspaper. Of course, in my house, my hubby would go to the kitchen to start dinner - LOL! We have decided it's better if I don't cook. But even if I don't want to live the 1950's lifestyle, it's fun to fantasize about the 1950's spankings. I also wonder if these folks are still around! Do they know their photos are floating around on the internet? Or do some of their family ever see these and recognize them? Wouldn't that be a shock? 'Mom! Dad! Oh my God!' Or even worse - 'Grandma! And that's not Grandpa!'

So what do you like? What do you want to see? I can tell by my counter that a lot of people are stopping by, but no one comments. Leave me a message - tell me what you want to see and I will do my best to find it (as long as it relates to spanking, that is!). I hate feeling like I'm talking to myself here. Every blogger wants feedback - otherwise, we'd go back to the little notebook with the lock on the outside.

Oh, and I missed out last night on my third spanking. But there were reasons. My hubby's mother is in the hospital and we had to go see her. Nothing serious - just some tests and getting her meds straightened out - but it was time consuming and tiring. Hubby insists that I'm getting a double dose tonight. We'll see!
Posted by Karyn at 12:16 PM 19 comments: 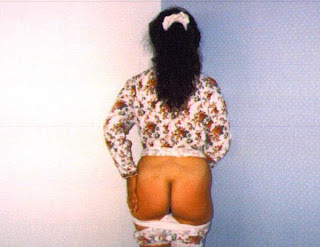 Back when I started this blog, I had taken a look at Corner Time by viewing a poll over on LDD and conducting one of my own here. At that time, 110 women had responded over on LDD and 20 had responded here. My analysis of the outcome is in one of my earlier posts. Looking at the polls 2 years later, I see that there have been quite a few people still voting and with interesting results.
My poll now has 223 female responses. 158 of them say they receive some form of corner time. Don't know if they like it or not, but they get it anyway! 51 of them don't get it and do want it - that's about 25%! I fall in to that category, by the way. Only 14 said they don't get it and are glad they don't. That's around 5%.
Over on LDD, there are 1024 female responses. 573 get corner time in one way or another. Again, don't know how they feel about it but they accept it. 303 don't get it and wish they did - a full 30% of them. 148 - about 15% - don't get it and don't want it.
On my poll, about 50% of the men (15 out of 32) said they don't give corner time with half of those saying maybe they should and the other half saying they wouldn't. On LDD, it's about 20% (60 out of 246) with the division between those who think they should and those who wouldn't being split down the middle again. Guys, I think the ladies are trying to tell you something!
So if I have done my numbers correctly, it looks like the guys are still missing an opportunity or not fulfilling a need that many of the women have. Nice to know I'm not alone when I feel like I'm missing something. Either we ladies have to speak up (I'm all for that lately!), or our men need to start giving marching orders - straight to the nearest corner. Look at the bright side guys - it's something you can do for her that doesn't cost you anything, and you have the added benefit of a lovely view!
Posted by Karyn at 6:57 AM 2 comments: