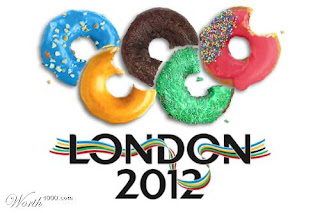 Oh, dear reader, I fear that I have really gone and stepped in it this time! Wait a minute - who am I trying to kid? I jumped right into it with both feet. What, you may ask, is IT? Shall I explain?

As you know, I am a huge fan of the Olympics. So while watching the Opening Ceremonies today, a thought came to me. I've been trying to find a way to jump start our spanking life. What if I were to make a game of the Games? I, of course, am cheering for the good old USA. So I thought some more, and finally hatched my plan.

I waited this evening until we had eaten dinner and were just being couch potatoes. Finally, I screwed up my nerve and asked hubby what he thought about making the next 16 days of the Games more interesting. He replied with a cocked eyebrow and a 'Go on............' I plunged in. Choosing my words carefully, I suggested that we could set 'penalties' that I would have to pay every time England won a medal. He wanted to know if that only applied to gold medals or if we were talking all medals. *Gulp* Apparently, he was warming to the idea!

I agreed that it could be for all medals. Yes, I did my research before suggesting this harebrained scheme. In 2004, England took 30 medals - 9 gold, 9 silver, and 12 bronze. Figured they weren't going to do any better than that and I could handle that much. Surely for the good of our spanking future I could make the sacrifice!

He next asked what sort of penalties I had in mind. Well, of course I had already thought that through, but I wanted him to get invested in the process, so I asked him what he thought they should be. Amazingly, he came up with pretty much what I had thought of! The following is what we settled on: a timed hand-spanking for bronze medals, a warm-up followed by 20 whacks with the implement of his choice excluding the cane or crop for silver, and a warm-up followed by 6 strokes of the cane or the crop for gold. He decided that I would check the medal standings every day at the same time for any British medals won in the previous 24 hours, and at 9:30 each evening, I would pay my penalties. Payments are limited to 3 per night (like England is going to win more than 3 medals in any one day!); more than that can be carried over to the next day. I also get a break between each penalty, probably to be spent as cornertime.

After that was settled, hubby was in a spanking mood so I was dragged off to the bedroom to pay the piper for another incident earlier today. You see, we had dentist appointments today. I have a terrible phobia about dentists. I have also gone like a good girl to every appointment for the last six years that I have lived here. Well, today it wasn't happening. We headed for the office and I just started to freak out. Nothing major, just racing heartbeat and feeling very anxious. Very strange - it simply is not in my nature to flip out like that. I finally told hubby that I couldn't do it - I was just not in the mood for anyone to be poking around in my mouth today. He laughed and said it was ok to chicken out. He also made the comment that he was going to smack my bum, to which I replied that I didn't care! Then he knew I was serious - I was willing to skip an appointment that we would still have to pay for since we cancelled at the last minute, and I never do anything like that. So he went in for his check-up while I stayed in the car. Would you believe - our dentist is really such a nice man, he wouldn't let us pay for my appointment! He said he understood, and he knew that I was very phobic about him in the first place (the first time we met, I told him I had a simple philosophy about dentists - you hurt me, I hurt you back), so he let it go. I felt much better about it after knowing that and figured I was off the hook. No such luck! Sitting here now on a warm backside as I type.

So what do you think of our Olympic spankings? Have I gotten myself into the deep stuff at the far end of the pond? Whatever - for the next couple of weeks, any time England wins a medal, think of me at 9:30pm GMT (4:30PM ET) and the fact that I am taking a spanking for England! And let's all pray that the British athletes are not having a banner year!
Posted by Karyn at 6:20 PM 3 comments:

For once, England is first!

Oh boy! The Opening Ceremonies of the Olympics are today! I've been waiting for this. We never watch sports in this house (except for Cleveland Indians baseball), but for the next two weeks there will be nothing but on the telly. And we get it first for a change! The Opening Ceremonies are being broadcast live here, which means they start at 12:45PM here, which is only 7:45AM Eastern time, and you in the States don't get the show until 7:30PM Eastern time tonight. So I'll have seen the whole thing hours before it even kicks off over there (even though I will see it from the angle that the BBC wants me to see it. That's ok - I'm going to watch the US broadcast again tonight on my sling box.). I'm impressed...........
However, they don't always get it right over here. When the Commonwealth Games were on (the European version of the Olympics), they identifed Susan Sarandon as Suzanne Sar(rhymes with share)-an-done(rhymes with condone). Still makes us giggle.............
Let the Games begin! Hey, maybe this is an opportunity to make some spanking bets with hubby - USA versus England. Nah - maybe not. I'd win all the bets and still be spankless.

UPDATE: Ok, I'm only 15 minutes into the show, and I have to tell you - if you weren't planning on watching, you're making a big mistake! This is spectacular!
Posted by Karyn at 6:28 AM No comments: